Malta plays its last game from Group D2 of the UEFA Nations League, facing Estonia at the A Le Coq Arena in Tallinn on Friday, kick-off at 18:00.

Therefore at this stage, Estonia start as favourites to win the group as even a narrow defeat to Malta, coupled with a win over San Marino, would ensure they regain promotion to League C. Malta, on the other hand, has to beat Estonia by at least two goals. Otherwise Malta has to put its hopes on San Marino holding Estonia in a draw or beat them in the last group game in programme on Monday.

Addressing the media on Thursday, Malta coach Devis Mangia said “We prepared the match in best way possible. We will go on the pitch and we will try our best, knowing that there are some difficulities … knowing that Estonia are clearly favourite because of the result of the first game … because of the ranking. We have to repeat, in some way, something we did in the game in Malta, avoiding some of the mistakes.”

In fact, at Ta’ Qali, Malta missed an early penalty while defensive mistakes led to Estonia’s two goals – one of them in stoppage time.

The situation is different than June. The June international window – which saw Malta playing four games in twelve days – came at the back of a long domestic season. Now players have played four matches from the 2022/23 domestic season while players of Hamrun Spartans, Hibernians and Gzira United were playing on a regular basis in Europe after the Paolites and the Maroons made it to the third qualifying round of the UEFA Europa Conference League and the Spartans went a step forward, reaching the play-off round. The players’ physical condition should therefore be much better than it was in June.

Mangia said “I expect a good game from my players. Regarding the physical condition, the data shows us that we are in a better condition than we were in June. I think that also the condition of Estonia will also be better than it was in June, considering that their are well into their (domestic) championship. The physical condition is one component. We have to put to game how we want to play … we have to play our game.”

When asked what he thought Estonia’s plan would be for this game, Mangia said “We have to be focussed on our idea and our plan. We prefer to think about and plan on what we can manage.”

Meanwhile, referring to the UEFA Europa Conference League campaign, Hamrun Spartans midfielder Matthew Guillaumier said ”It was a good expeirience. We managed to make history. The games were beneficial too because we managed to play eight games at a high level apart from the first four league games and therefore even physically, it helped a lot. We showed that we can compete even with foreign teams.” 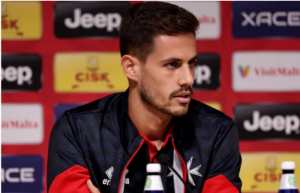 “Usually when the teams are knocked in the first or second round, it would be just two or four games and then there would be a gap of two months (before the September international window). However since we managed to reach the play-off round, we played eight matches and the matches ran until the league started . So phyically, you definitely feel the difference. And even regarding the teams you are facing … the further you go, the quality is much better the teams. So you get more experience facing better teams.“

For this game, Adam Magri Overend would not be available as he is nursing an injury. A new face in the squad is English-born right winger Jodi Felice Jones of Oxford United who is one of six foreign-based players, the others being goalkeeper Jake Galea who is now playing for Etzella Ettelbruck in Luxembourg, Zach Muscat of Farense, James Brown of St. Johnstone, Teddy Teuma of Union St. Gilloise and Joseph Mbong of Hapoel Kiryat Shmona. 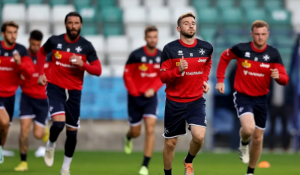 This will be the fourth clash between the two teams to be played on Estonian soil. Malta had defeated Estonia 1-0 in a World Cup qualifier in May 1993. The other two games were friendly matches – a 2-1 win for Estonia in August 2008 and a 1-1 draw in August 2016.

Estonia, who were demoted to League D after losing the play-out to Cyprus following a goalless draw at home and a 2-0 defeat in Larnaca in March, played another two matches in June, losing 0-5 to Argentina in Spain and holding Albania in a goalless draw in Tirana

Swiss coach Thomas Haberli, who has been in charge of the team since January 2021, has to deal with the absence of Mattias Kait of Rapid Bucharest and Marten Kuusk of Ujpest but could still count on a strong squad with players based in England, Poland, Switzerland, Romania, Armenia, Italy, Sweden, the Czech Republic and Thailand.