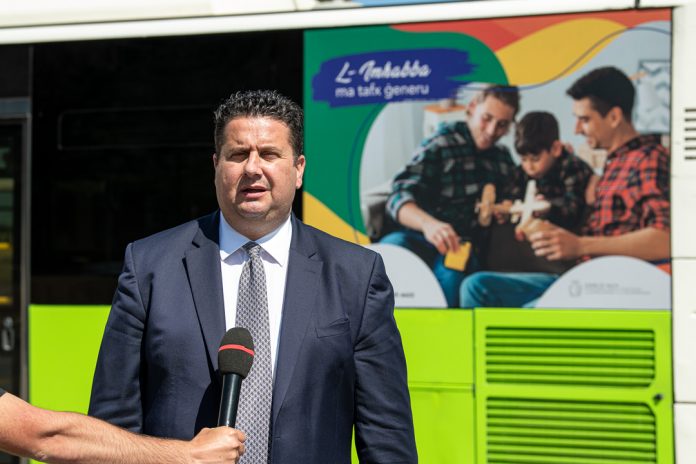 Love knows no gender and Our hearts are open to the diversity of our children are the themes for a month-long campaign that is being launched today in the island of Gozo on the occasion of the International Day against Homophobia, Biphobia, Interphobia and Transphobia, which will be celebrated on Monday 17th May. This message will be disseminated through four buses in Gozo as they go about their regular routes around the island.

The aim of this campaign is to continue to increase the visibility of the presence of LGBTIQ persons in Gozo and to transmit two principal messages: firstly, that families take different forms, all of which should be accepted and celebrated, and secondly, that children should be accepted for who they are, irrespective of their sexual orientation or gender identity.

Malta is expected to keep it’s first place ranking in the ILGA-Europe Rainbow Index for the sixth consecutive year. However, we are aware that there is still work to be done in order to achieve our aims.

The Special Eurobarometer on Discrimination in the European Union of 2019 found that 20% of Maltese and Gozitan respondents do not agree that lesbian, gay and bisexual persons should have the same rights as heterosexual persons. The same survey also found that only 38% of Maltese and Gozitan respondents feel completely comfortable with a same-sex couples showing affection in public through a kiss or by holding hands. This reflects results from the FRA survey of the same year that found that 47% of LGBTIQ persons in Malta and Gozo avoid holding hands in public for fear of being threatened or harassed, and that only 27% of LGBTIQ persons are ‘out’ with all members of their family.

During this launch, Minister for Justice, Equality and Governance Edward Zammit Lewis emphasised that government is committed to continue in its efforts to promote equality in all areas, including for LGBTIQ persons in Malta and Gozo, also thanks to the work of the Human Rights Directorate which is responsible for assuring the implementation of the LGBTIQ Equality Strategy and Action Plan.

From his end, Minister for Gozo Clint Camilleri stressed the importance of acknowledging and celebrating the diversity which is also present in the island of Gozo. In fact, it was in Gozo, that the first civil union was celebrated in 2014. He thanked LGBTI+ Gozo for its work in this field and the assistance it provides to the LGBTIQ community in Gozo, and promised continued support.