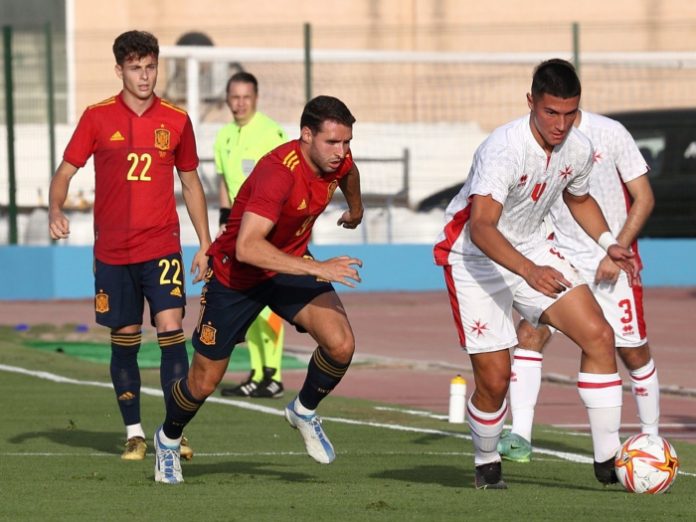 Spain Under21 Team was too strong for Malta emerging winners 7-1 over the boys.

This was the closure of competition for the Malta Under21 Team who attained six points in total in this Group C but as expected the final match was too much to handle for the boys against one of the top teams in Europe also at this level, with magnificent Andrea Zammit goal towards the end was more than just a consolation and double figures for the boys in final standings in the goals scored column, 10 in total.

In the first half, Malta showed composure and determination, moving the ball forward, keeping possession at times against this Spanish side who pressed relentlessly forcing the Malta back line to defend deep for most of the 90 minutes.

Three changes in the starting eleven by Malta coach Gilbert Agius from the 1-3 defeat on Friday at home to Slovakia, with Karl Mohnani, Joseph Zammit and Bradley Sciberras in from the start to replace Aleandro Garzia, Andreas Vella and Andrea Zammit, the latter Valletta FC forward coming on during the match as a second-half substitute to net the consolation goal for Malta.

It took eight minutes for Spain to break the deadlock, Gil’s overhead kick was unsuccessful, the ball dropping to Roberto Navarro who controlled brilliantly before squaring his shot from the edge of the box in the bottom corner to put our opponents ahead.

Spain’s pressure after the lead kept relentless seeing on several occasions the sight of goal, yet the Malta defense maintained its shape and composure to deny their opponents numerous times.

Malta came close in the 31st minute, a perfect build-up ended with Mattia Veselji receiving the ball, but his shot from 30 yards out was a comfortable catch for Spain keeper Julen Agirrezabala.

Before the interval, Spain kept their ascendancy and on the stroke of half-time Birkirkara keeper, Amara Sylla proved fundamental in blocking a low shot by former Tottenham winger Bryan Gil.

Spain continued the same momentum after the resumption and two minutes on the clock, captain Abel Ruiz lurked inside the six-yard box to tap the ball home following an assist by Riquelme.

Four minutes later another stunning save by Malta keeper Amara Sylla clear outside his line denying Rodri’s attempt to chip the ball in the net, however, the Malta keeper could do nothing on 55 minutes as Manu Sánchez took advantage of slow defending by the Maltese back line to make the score 3-0 for the Spaniards.

4-0 on 64 minutes as Abel Ruiz netted his brace after running through on goal, and the Braga forward finished with aplomb, fifth goal five minutes later for Spain it was Roberto Navarro who also scored a brace slotting the ball behind the back of the Malta keeper midway through the second period.

In 73 minutes it was 6-0 for Spain, substitute Julen Lobete taking the plunge from distance, the ball passed through a number of legs deceiving keeper Sylla before ending up in the bottom corner.

A few moments later, on 75 minutes best move for Malta who pressed forward, was an excellent move by Shaun Dimech squaring the ball perfectly towards the unmarked substitute Zean Leonardi but his strike went just over the crossbar.

7-0 on 78 minutes in a move forged by two substitute players with Camello passing the ball to Julen Lobete who netted once again to make the score line extremely harsh on the Malta U21 Team.

However, Malta managed to find the net in an emphatic manner on 84 minutes,  when Valletta striker Andrea Zammit tried his luck from the centre circle taking advantage of the Spanish keeper outside his line to score a fabulous goal, Zammit’s second in the competition and the positive note for this Malta U21 Team scoring a total of 10 goals in the qualifying edition just over.

Heavy defeat for Malta’s U-19 Women

Hamrun bow out of Europa Conference League following 3-3 draw with...