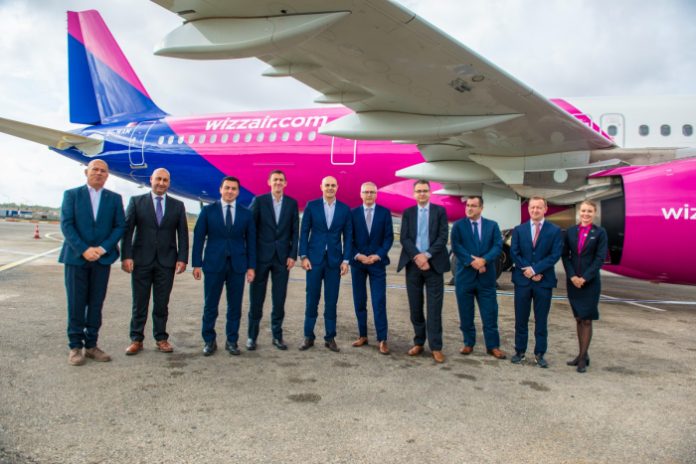 The new airline will commence operations tomorrow, on 27th September 2022, with the first flight taking off from Rome Fiumicino International Airport.

The announcement was made following the arrival of the first aircraft registered under Wizz Air Malta, welcomed by a water cannon salute at the Malta International Airport (MIA).

Minister Aaron Farrugia said that it is indeed of great satisfaction that Malta was selected for this new airline, and that he is happy to see the collaboration between EASA and CAD. “We are expecting this airline to register a substantial amount of aircraft in our country, further increasing the number of our already strong 9H fleet. Malta will continue to support investors who choose Malta as their jurisdiction for the benefit of this very important industry, and ultimately for the strength of our economy,” he said.

“In the context of global instability at the moment, businesses in various sectors of our varied economy are finding stability in Malta. And stability is crucial for doing business. As we did during the pandemic when we supported all business operations with a wage supplement, we are now also maintaining stable energy prices, which is giving certainty to businesses in an otherwise volatile period. These developments in the aviation industry, such as this new airline, are expected to have a significant impact on our economy and generate further jobs. It will also lead to further opportunities and initiatives,” Minister Farrugia concluded.

Capt. Charles Pace said that he was proud to see Malta being selected by another key industry stakeholder. He thanked all those who collaborated to issue the AOC and AOL on time. He also looks forward to seeing the company grow in the coming months with the addition of a substantial amount of new aircraft.

Wizz Air President Robert Carey said that; “We are pleased to announce the establishment of Wizz Air Malta, which will provide opportunities to further diversify our operations and drive growth. Malta’s economic and regulatory regime will enable Wizz Air to strengthen its position in the global market. We would like to thank EASA and CAD for their support and expertise, and we look forward to working with the Maltese authorities over the coming years.”

Minister for Education and Employment launches the Malta VET Awards