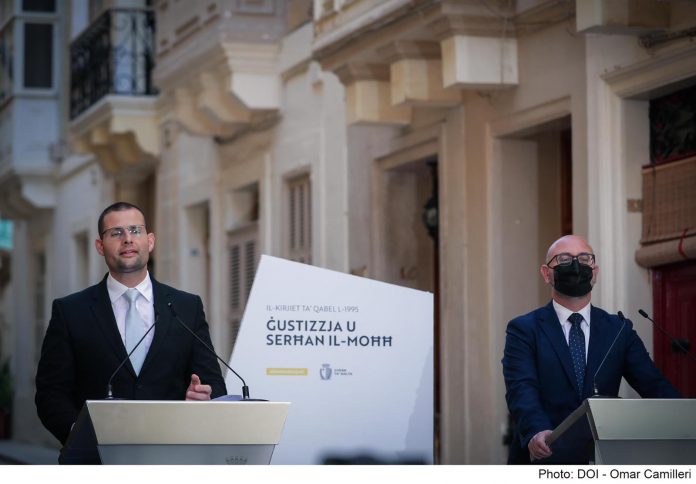 “This is a fair reform that will provide certainty, reassurance, and justice” said Prime Minister Robert Abela at a news conference with the Minister for Housing Roderick Galdes on the reform of pre-1995 old rents.

The Prime Minister reiterated that through the solution the government is giving to these rents it will look after the rights of Maltese and Gozitan citizens – both those entitled to their homes and those who deserve appropriate compensation for the use of their property.

Dr Abela explained that the solution to the anomalies in pre-1995 leases would offer a balance that would ensure security.

“This is a government that undertakes major social reforms with courage and determination. A government close to the people that has never been afraid of challenges because it understands the different realities families and pensioners are living. ”

The Prime Minister recalled that after the 2010 reform, the Courts continued to give sentences condemning the
State for damages of millions of euros paid from the taxes of the Maltese people. In fact, in the 2010 reform the state was also convicted by the European Court of Human Rights.

“This has led to people living in fear of being left homeless with rent increases which rises as much as their pension. With this reform we will remove this fear by protection of the State “, reiterated Dr Abela.

The reform proposes that according to the means of the tenants, with a remedy before the Board governing the rent, the
landlords can start receiving a lease of up to 2% of the value of the leased property.

The government, through a healthy rent benefit, will ensure that no one pays more than they can afford.
In fact, the government will cover any increase in rent for pensioners up to a maximum of € 10,000 while for tenants in full-time employment they will pay the difference between 25% of their income and the rent set by the Board up to a maximum of € 10,000 per year.

The Prime Minister also announced that a new unit will be set up in the Housing Authority which will offer legal assistance.
free of charge to tenants

The first stone of the Aquatic and Sports Center laid in...