The joint leaders of Turkey’s pro-Kurdish opposition party, People’s Democracy (HDP), Selahattin Demirtas and Figen Yuksekdag, have been arrested along with at least nine other MPs.

They are accused of spreading propaganda for militants fighting the Turkish state.

Hours after Mr Demirtas was arrested in Diyarbakir, a car bomb killed eight people and injured more than 100.

Militants have been fighting for years to achieve independence for the Kurds, Turkey’s biggest ethnic minority.

Turkey has been in a state of emergency following a failed military coup last July. 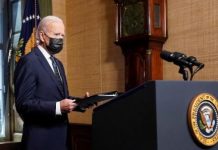